First Church of the Brethren 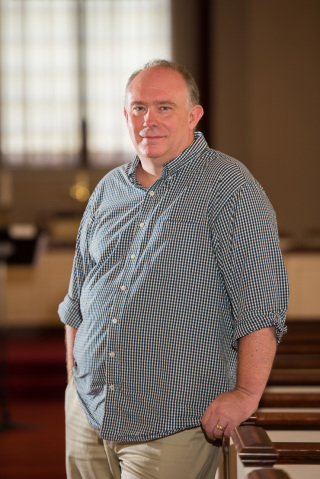 Pastor Kevin and his wife Pat and their son Kevin live in Melrose Park along with their dog, Lucky. As a family they keep busy with a variety of activities from spending time with friends and family to camping and fishing.  Summer often finds them at the local pool or traveling.

Pastor Kevin began serving at First Church in January of 1999, but has been in ministry since the summer of 1991.  He is a graduate of Bridgewater College (B.A. In Religion and Philosophy, 1991), Bethany Theological Seminary (Master of Divinity with a focus on Discipleship,1998) and Biblical Theological Seminary (Doctor of Ministry with a focus on Small Group Spiritual Formation 2009). He enjoys reading on a broad range of subjects including: ancient history, church history, New Testament studies, fiction, and Karate.  Pastor Kevin is a member of the North American Patristic Society and is also an Adjunct Instructor at Penn State Abington teaching religious studies and Personal Defense.

Pat is a School Psychologist in a local school district.  She is also working on graduate studies at a local university.  Pat has lived in the Philadelphia area since college.

Their son Kevin is a student at Phil-Mont Christian Academy and he enjoys karate, swimming, scouting, piano and science. As a family they enjoy traveling, movies, and adventures of all types. 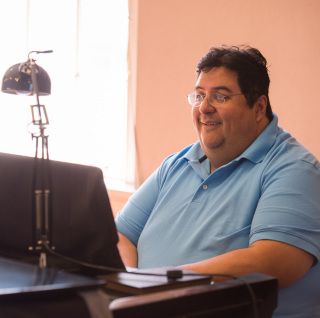 Alex Ramirez began his piano studies at age three with Mrs. Tony Lama, wife of the famous boot maker in Texas.  After her death he studied piano with Dr. Aryl Paul, chairman of the piano department a the University of Texas.

At age five, Alex became the youngest person ever to study piano at the University of Texas.  During middle and high school he won every major youth piano competition in the state of Texas.  While still a teenager, he played as soloist with many symphony orchestras in the Southwest including the El Paso Symphony, the Youth Symphony of El Paso, the Houston Civic Orchestra, the University of Texas Symphony Orchestra, and the New Mexico State University Symphony Orchestra.

After graduating high school he attended the University of Texas where he studied piano and double bass with Dr. Neil Stannard, and graduated with highest honors.  He studied orchestral conducting with Abraham Chavez, Jr., the former conductor of the El Paso Symphony and professor at the University of Texas.  He also studied conducting with Rosalind Erwin, the conductor of the Philadelphia Young Artists Orchestra and professor at Drexel University.

Alex continues his piano studies with his mentor of over 25 years, Mr. Robert Durso, a faculty member of the Golandsky Institute of Piano.  Alex is a Certified Instructor of piano with the Golandsky Institute of Piano.  He teaches the Taubman approach to piano playing to a large studio of piano and double bass students.  He serves as principal bassist of the Independence Sinfonia, an outstanding chamber orchestra based in Montgomery County, Pennsylvania conducted by Daniel  Matsukawa, principal bassoonist with the Philadelphia Orchestra.  In 2010 he appeared as piano soloist with this group playing Mendelssohn's Piano Concerto in g minor to high acclaim.  He is also a bassist with the Academy Chamber Society Orchestra, which is based in Montgomery County as well.  In 2007 Alex appeared as piano soloist with this orchestra playing George Gershwin's Rhapsody in Blue in a performance which drew rave reviews.

Alex is the music director of the Celestia Performing Arts Organization, a community group of singers and musicians that performs music of all genres in the greater Philadelphia area.  He also serves as music director at the Philadelphia First Church of the Brethren, a position he has held for 24 years.

He is extremely active as a soloist, accompanist and recitalist performing regularly in New Jersey, Delaware, New York, and Philadelphia.  Upcoming performances include recitals with soprano Michelle Schulman, flutist Lisa Davis, principal flutist of the Independence Sinfonia, and the Ridge Avenue Quintet.  In 2014, Alex joined forces with bassist Larry Jones to found the Palladio Chamber Ensemble, an orchestra of professional musicians in the greater Philadelphia area.  Alex recently played the Haydn Piano Concerto in D with this ensemble.  This ensemble is unusual in that it plays with no conductor, giving the group a true chamber music experience.

Carol is married to David who is now retired.  She has two children, both of whom are married, and one absolutely beautiful granddaughter and four gorgeous grandsons.

Carol is a nurse by training, but now spends her time managing the church office.